T-Pot is based on the network installer of Ubuntu Server 16.04.x LTS. The honeypot daemons as well as other support components being used have been containerized using docker. This allows us to run multiple honeypot daemons on the same network interface while maintaining a small footprint and constrain each honeypot within its own environment. In T-Pot we combine the dockerized honeypots conpot, cowrie, dionaea, elasticpot, emobility, glastopf, honeytrap, mailoney, rdpy and vnclowpot with ELK stack to beautifully visualize all the events captured by T-Pot, Elasticsearch Head a web front end for browsing and interacting with an Elastic Search cluster, Netdata for real-time performance monitoring, Portainer a web based UI for docker, Spiderfoot a open source intelligence automation tool, Suricata a Network Security Monitoring engine and Wetty a web based SSH client. 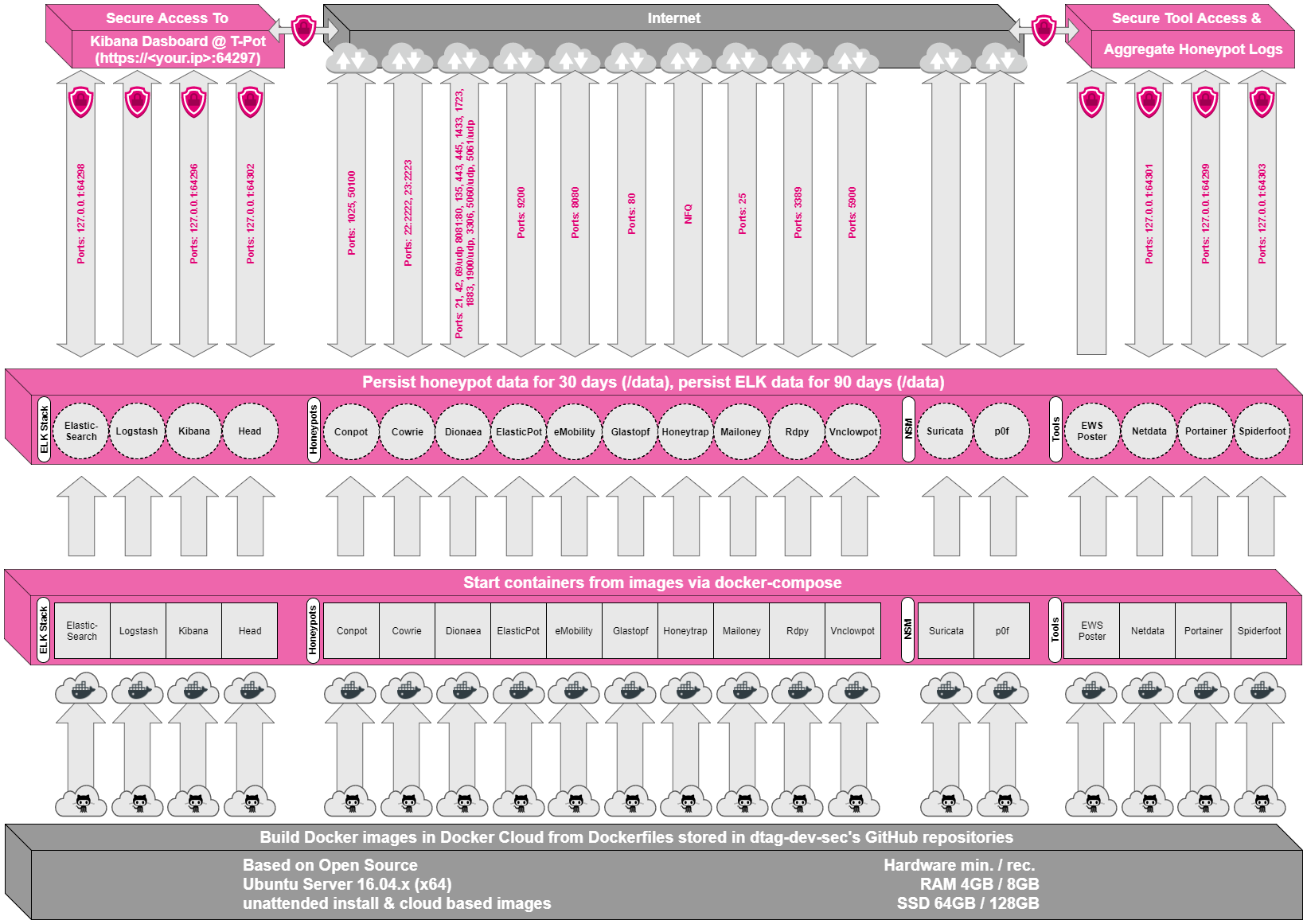 While data within docker containers is volatile we do now ensure a default 30 day persistence of all relevant honeypot and tool data in the well known /data folder and sub-folders. The persistence configuration may be adjusted in /opt/tpot/etc/logrotate/logrotate.conf. Once a docker container crashes, all other data produced within its environment is erased and a fresh instance is started from the corresponding docker image.

Basically, what happens when the system is booted up is the following:

Within the T-Pot project, we provide all the tools and documentation necessary to build your own honeypot system and contribute to our community data view, a separate channel on our Sicherheitstacho that is powered by T-Pot community data.

The source code and configuration files are stored in individual GitHub repositories, which are linked below. The docker images are pre-configured for the T-Pot environment. If you want to run the docker images separately, make sure you study the docker-compose configuration (/opt/tpot/etc/tpot.yml) and the T-Pot systemd script (/etc/systemd/system/tpot.service), as they provide a good starting point for implementing changes.

The individual docker configurations are located in the following GitHub repositories: